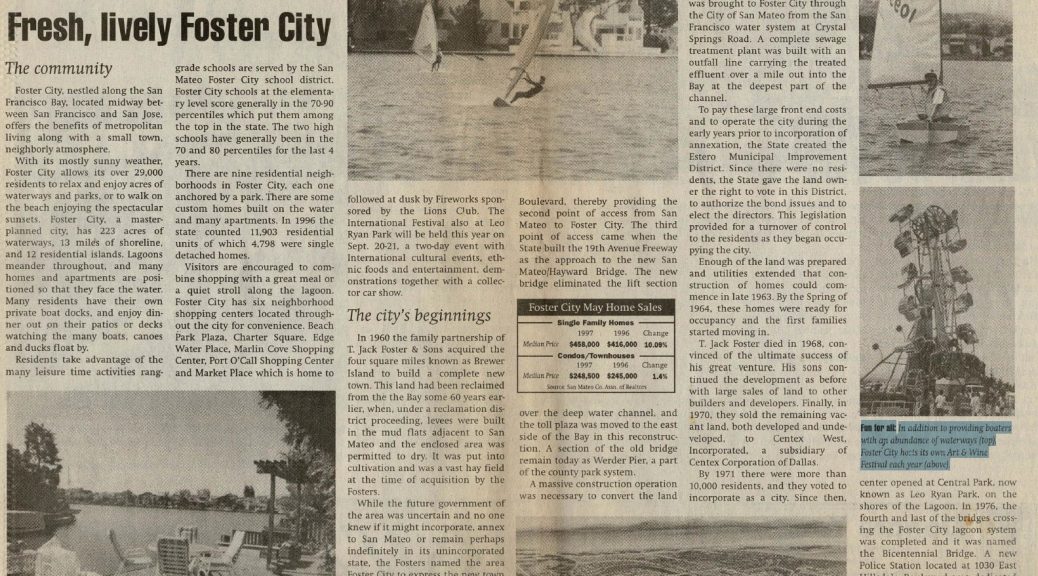 Foster City, nestled along the San Francisco Bay, located midway between San Francisco and San Jose, offers the benefits of metropolitan living along with a small town, neighborly atmosphere.

With its mostly sunny weather, Foster City allows its over 29,000 residents to relax and enjoy acres of waterways and parks, or to walk on _the beach enjoying the spectacular sunsets. Foster City, a master planned city. has 223 acres of waterways, 13 miles of shoreline. and 12 residential islands. Lagoons meander throughout, and many homes and apartments are positioned so that they face the water. Many residents have their own private boat docks, and enjoy dinner out on their patios or decks watching the many boats, canoes and ducks float by.

Residents take advantage of the many leisure time activities ranging from active adult sports programs to extensive summer and afterschool activities provided by the Parks and Recreation Department. There are over 19 parks around the city and a fishing pier that extends into the bay. A trail-promenade rims along the bay that extends from Coyote Point in Burlingame and is heavily used by skaters, cyclists, walkers and runners of all ages and sizes.

There are nine residential neighborhoods in Foster City, each one anchored by a park. There are some custom homes built on the water and many apartments. In 1996 the state counted 11,903 residential units of which 4,798 were single detached homes.

Visitors are encouraged to com[1]bine shopping with a great meal or a quiet stroll along the lagoon. Foster City has six neighborhood shopping centers located throughout the city for convenience. Beach Park Plaza, Charter Square. Edge Water Place, Marlin Cove Shopping Center, Port O’Call Shopping Center and Market Place which is home toa Longs Drug and Safeway and Metro Center, a 22-story office tow[1]ers which is supposed to be the tal[1]lest building between San Francisco and Los Angeles! And of course Hillsdale Shopping Mall is just across 101 in San Mateo.

There are many activities during the year such as the Art & Wine Festival, Concerts in the Park. On the 4th of July at Leo Ryan Park there is entertainment, games, the /”best little parade,” food booths, followed at dusk by Fireworks sponsored by the Lions C1ub. The International Festival also at Leo Ryan Park will be held this year on Sept. 20-21, a two-day event with International cultural events, eth[1]nic foods and entertainment, demonstrations together with a collector car show.

In 1960 the family partnership of T. Jack Foster & Sons acquired the four square miles known as Brewer Island to build a complete new town. This land had been reclaimed from the Bay some 60 years earlier, when, under a reclamation district proceeding, levees were built in the mud flats adjacent to San Mateo and the enclosed area was permitted to dry. It was put into cultivation and was a vast hay field at the time of acquisition by the Fosters.

While the future government of the area was uncertain and no one knew if it might incorporate, annex to San Mateo or remain perhaps indefinitely in its unincorporated state. the Fosters named the area Foster City to express the new town design concept they envisioned for the development. A model of the early design is on display in the lobby of the Foster Building. The original concept has remained substantially unchanged which was to develop a balanced community able to function physically, economically, and socially to meet the needs and desires of its residents.

The only access to the island from San Mateo was on Third Avenue, which was the approach to the old San Mateo/Hayward Bridge, which had at that time the toll station on the west side of the Bay. One of the first decisions was to construct a bridge at Hillsdale Boulevard, thereby providing the second point of access from San Mateo to Foster City. The third point of access came when the State built the 19th Avenue Freeway as the approach to the new San Mateo/Hayward Bridge. The new bridge eliminated the lift section over the deep water channel. and the toll plaza was moved to the east side of the Bay in this reconstruction. A section of the old bridge remain today as Werder Pier, a part of the county park system.

A massive construction operation was necessary to convert the land to a new City. Eighteen million cubic yards of fill were necessary to provide gradient for the storm water runoff and cover for the utility lines as well as support for buildings. Two hundred and thirty acres of lagoons had to be created to collect the storm water and hold it for pumping into the Bay. Water was brought to Foster City through the City of San Mateo from the San Francisco water system at Crystal Springs Road. A complete sewage treatment plant was built with an outfall line carrying the treated effluent over a mile out into the Bay at the deepest part of the channel.

To pay these large front end costs and to operate the city during the early years prior to incorporation of annexation, the State created the Estero Municipal Improvement District. Since there were no residents. the State gave the land owner the right to vote in this District, to authorize the bond issues and to elect the directors. This legislation provided for a turnover of control to the residents as they began occupying the city.

Enough of the land was prepared and utilities extended that construction of homes could commence in late 1963. By the Spring of 1964, these homes were ready for occupancy and the first families started moving in.

T. Jack Foster died in 1968, convinced of the ultimate success of his great venture. His sons continued the development as before with large sales of land to other builders and developers. Finally, in 1970, they sold the remaining vacant land, both developed and undeveloped, to Centex West. Incorporated, a subsidiary of Centex Corporation of Dallas.

By 1971 there were more than 10,000 residents, and they voted to incorporate as a city. Since then, public facilities. commercial development, and new homes have continued to be built.

In 1972, the City opened a new City Hall. In 1974, the recreation center opened at Central Park. now known as Leo Ryan Park, on the shores of the Lagoon. In 1976, the fourth and last of the bridges crossing the Foster City lagoon system was completed and it was named the. Bicentennial Bridge. A new Police Station located at 1030 East Hillsdale Boulevard was dedicated in March 1985.

Thirty-six years after the Foster family acquired and built Foster City, the community continues to be a place ‘of advancement and growth. 1997 represents the year we opened the new Library, and remodeled Recreation Center, in addition to other developments that will happen as we reach build out.

As we approach the 21st century. Foster City remains a planned community, continually renewing a vision for a city that offers its resident and businesses many opportunities for success today and well into the future. ‘

Fun for all: In addition to providing boaters with an abundance of waterways (top), Foster City hosts its own Art & Wine Festival each year (above).