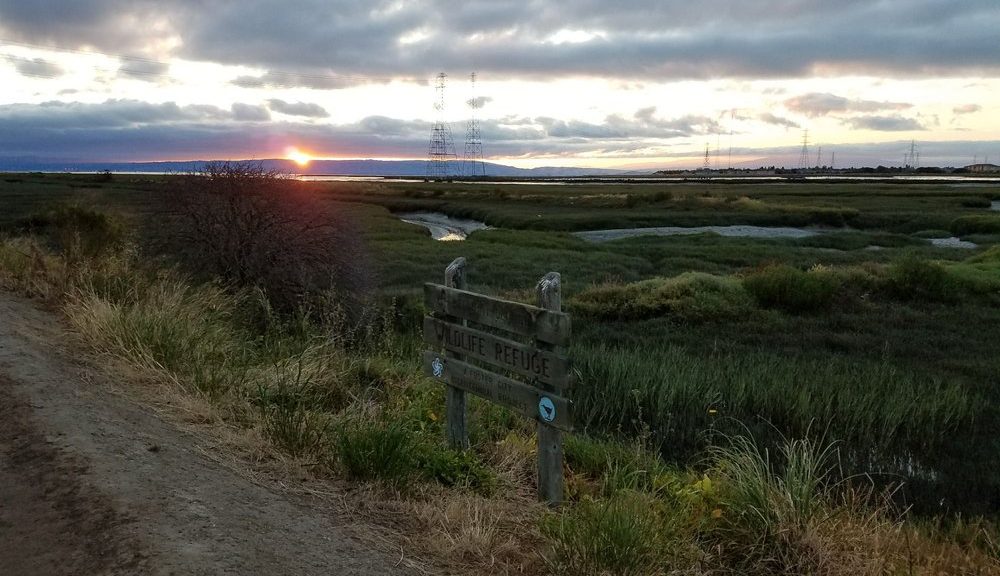 “The more artificially complex man’s affairs become, the more he yearns for the fundamentals, the things of the earth. Some would say it is a form of escapism and perhaps it is in a way, but not an escape from reality, rather a flight from the unreal things.”

Last Saturday, while sitting on the bench at Foster City’s Belmont Slough Wildlife Refuge, my thoughts moved to a time in history 1,000 years ago when a simple stone-age people, given the name Costonoans by the early Spanish Explorers, quietly paddled their tule boats up this slow meandering slough to catch sturgeon and salmon and gather shell fish to vary their diet.

Suddenly, my thoughts were broken by a long series of slurred notes from a Peregrine Falcon perched high above a transmission tower. He had singled out a pintail duck that appeared to be weak and sick. With tremendous aerobatic skills, he plunged into a 200-mile an hour dive; stopping within inches of the water to level off, his talons outstretched to snatch his prey. To some this may seem cruel, but it is nature’s way of controlling the marshland population and ensuring the survival of the fittest.

It was now approaching mid-day and the tidal waters were extra high. The flow of the incoming tide forced small animals and birds to higher ground. A Clapper Rail stood motionless on top of a piece of floating driftwood and a timid Saltmarsh Harvest Mouse clung desperately to the top of a marshland Grindellia bush. Some animals were in danger of losing their lives, for the Marsh Hawk with his keen eyesight was patrolling the marsh.

Early afternoon a gentle breeze tingled my cheek and sunlight cast its diamond-like shimmer upon the ebbing water. It was the magic hour when, at a certain level, the receding tidal water signaled the ringing of the “dinner bell”. A cloud-like mass of shorebirds circled the marsh and then came to rest upon the partially exposed mudflat. Some of these birds probed deep into the mud for worms, amphipods and copepods, while others gracefully swept the water back and forth with their long-curbed bills for insects and their larvae.

Our marshlands provide an abundance of food; a necessary stop for rest; and an essential breeding ground. Some of these birds are all-year residents; others visit here on their yearly migratory flight; while a few only eome here occasionally when they veer from their normal course.

As I walked along the trail I observed a vast expanse of low horizon showing bands of lush green vegetation. These marshland plants grow only in certain locations and are especially adapted to their harsh salty environment. One plant growing nearest the water, called cordgrass, is considered one of the most important plants in the world today. This unusual plant is considered the “staff of life” for a large portion of our marine life in the bay and coastal waters. This plant when decomposed with the help of fungi and bacteria creates a vegetable soup full of proteins, carbohydrates and vitamins called detritus. Twice daily tides mix and carry this food matter to our bay and ocean waters. It is also one of
our best pollution fighters. Cordgrass takes in more carbon dioxide and smog than any other plant in the world and gives us in return an equally large amount of oxygen.

Unlike cordgrass which has special root membranes that separate the salt from the salt water, pickleweed, another plant of the marsh, stores salt in special plant cells. Pickleweed, like desert plants, has learned to adapt to its territory which contains little fresh water and salty soil. Its leaves are reduced to scales, giving it a pickle-like appearance.

As the sun set and dusk descended over the marsh, it was time for the night shift to arrive. Black-crown Night Herons flew overhead and made ready for a night’s fishing. The Great Blue Heron with a wing-spread of six feet, came to rest about a 100 yards away, and the silhouette of the Short-eared Owl was seen against the sky.

I reluctantly returned home remembering the words of Thoreau:

“Nature will bear the closest inspection. She invites us to lay on eye level with her smallest leaf, and take an insect view of its plain.”

When you explore the mysteries of the marshland for yourselves, a self-guiding nature trail brochure entitled “Marshflat Heritage Trail”, is available at the Foster City Chamber of Commerce arid the Foster City Recreation Center.

For further information about our marshlands contact Ron White, present Chairman of the Belmont Slough Advisory Committee. This Committee was formed for the protection and enhancement of our Belmont Slough.