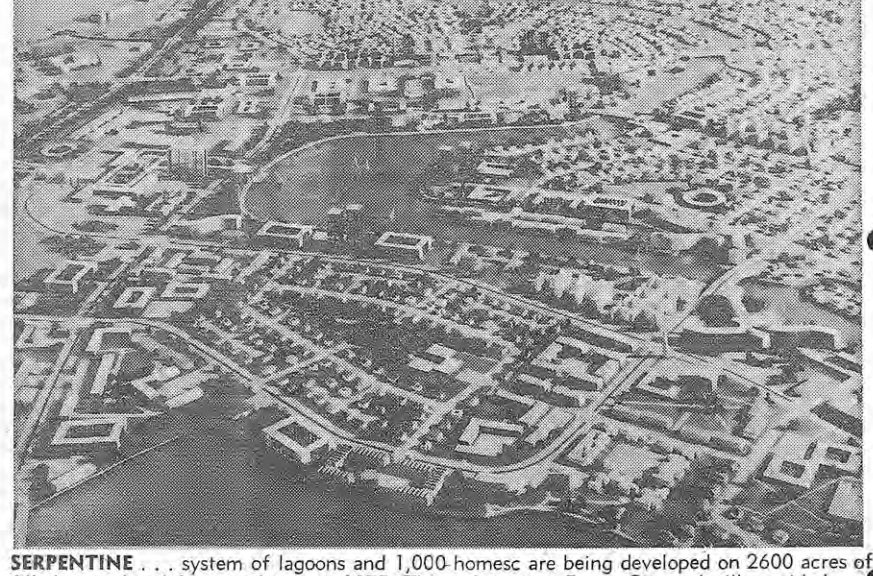 This month the first one hundred homes of Foster City will be completed, and families will be living in an area that just a few years ago was salt ponds and pasture land. Foster City is the result of the imagination and courage of T. Jack Foster, with the assistance of his sons, T. Jack Jr., Bob, and Dick, and the skill and labors of the Operating Engineers. It is one of the largest dredge and fill projects in northern California. Foster City is located east of S.an Mateo on 2600 acres of land that was formerly known as Brewers Island, and when completed in 1975 will provide housing for 35,000 persons in 5000 ·single unit dwellings, 4600 garden and town apartments, and 1400 high rise apartment units.

Development of the city began in 1959, according to a Master Plan that was created by Wilsey, Ham and Blair, that provides for a balanced community and tax base with 150 acres of land for commercial uses, 310 acres for light industry, 180 acres for schools, 40 acres for churches, and several parks, all built around a 13-mile lagoon system. A major part of the lagoon system is being constructed by the Granite Construction Company and is one-third completed with 903,415 cubic yards thus far removed. The sides of the island canals are lined with concrete, and the main channels are lined with crushed rock to ease maintenance and reduce wave deterioration.

No power boating will be allowed in the lagoons – only sail boats. The water height will be a constant six feet and controlled by tidal gates that will also serve to completely change the water in the lagoons regularly. In ease of excessive storm runoff, pumps capable of pumping 800 gps are being installed. The land that Foster City is built on is being raised an average of four-and-a-half feet, and will require 18,000,000 cubic yards of sand fill to complete. To date, the Hydraulic Dredging Company, contractors for the project, have completed approximately one-sixth of the job (3,053,000 cubic yards). They employ approximately 75 men on three shifts, six days a week. It is expected that work will continue there through 1968.

The sand is being moved by dredge and loaded into float barges, and pushed by the tug boats of the Harbor Tug and Barge Company to a handling basin at the edge of Foster City. Suction pipes then transport the material one-and-a-half to two miles to various fill sites on the island. This operation was covered in more detail in the November issue of “Engineering News.”

Kunz Paving Company is doing the area grading. The progress of Foster City is being handled by the Estero Municipal Improvement District and was formed by an act of the State Legislature in 1960. The city manager is George C. Shannon.

Foster City is composed of nine neighborhoods, each divided into units.

To date, Unit 1, on Neighborhood 1, is the area where the homesites are being completed. In Unit 2, of Neighborhood 1, all storm drains, water and sewer lines, and electrical and telephone conduit is being placed underground. Murphy Brothers, Inc., are contractors of this unit with a contract price of $1,070,000.

Construction of the residential homes in Neighborhood 1 of Foster city is being completed by three well-known volume builders, Kay Homes, Due-Elliot, and Eichler. In addition, there are 1100 waterfront and island lots that will be offered for lease, and 12 peninsula builders will be constructing only custom-designed homes on these properties. Foster City will provide housing for 11,000 families, and Foster City business and industry will provide from 7,000 to 10,000 jobs. Thus, the work of the Operating Engineers is creatively helping the development of the San Francisco Bay Area.